XenoDream features new or improved in versions 2.4 and 2.5

New or improved in XenoDream v2.5

Support for Windows themes in Windows XP and later.

Most buttons have new or improved images.

Some of the new buttons and memory spots (in Windows XP)

One new constructor for making fixed shapes: an eccentric torus with various profiles.

One to twist the top or both ends of an object.

Two metamorphs for making walled tunnels through objects: one for a single tunnel with bevels, the other a grid of tunnels.

Four metamorphs that turn an object into a lattice of cubes or spheres connected by rods or springs, or a random molecule.

Seven metamorphs for making bristles, spires or hair, in radial, axial or vertical directions, with variable thickness or bending. One is good for reeds or grass.

Focused areas are no longer affected by leakage from more distant blurred areas.

Tip of the Day window on startup.

Mesh export: excluding pieces now works reliably over the whole range. Size distribution entries can be clicked as a shortcut to exclude them.

New or improved in XenoDream v2.4

The camera orientation can be used. PRT files now include the ID channel. The PLY format is also supported.

Six tiles for replicating holons. One for making copies in an arc; two ladder shapes with optional helical twisting; an arch with eight shapes; random oval or rectangular arrangements with variable random orientation.

Other additions flatten or modulate towards a cylinder, and modulate around a horizontal valley. 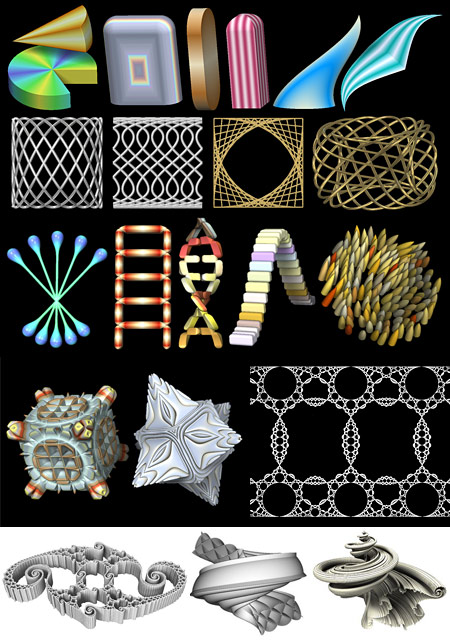 Increased maximum number of keyframes to 40.

The spline interpolation has been rewritten to allow separate settings for the camera and the object morphing, with variable amounts of smoothing, from extra smooth to linear, and negative values for magnetic bounce effects. There is also an acceleration control to vary the rate of change, with an S-bend option. All can be set per keyframe, or synchronized. An Autobias option allows object morphing to avoid overshoots within constant segments, by biasing smoothing into neighbouring segments. The smoothing now correctly accounts for varying keyframe intervals.

A Subframe control shows progress during animation preview, and allows scrubbing between keyframes at other times.

Improved quality and timing of preview, and frame controls are updated at each keyframe. Various bugs fixed.

Options to reverse the gradient, and trim nodes at either end or anywhere. Capture randomised gradient from any rectangle on screen. Increased number of gradient memory spots to 14.

The Depth of Field effect is scaled to the picture size, and is faster to preview and apply.

In Mesh Export, while adjusting simplified mesh size, the manifold status of the mesh is shown.